After a long, cold winter, we finally had a day of normal temps at around 50 F with sunshine, a great day to brew.

Everything was going great…There was a bit of a delay while we warmed sparge water, but we got the flow going wonderfully. The beer cleared with a few chunks still coming through, and then we went to the kettle and the mash stuck. We tried pulling wort through by filling the hose with water and starting a siphon, multiple times. We added sparge water to put more pressure on the wort to go through the grains. Kyle both blew into and suck on the hose to unclog the problem. Finally Tom just dug into the grain bed which started the flow again. There was a lot of frustration and a long delay but we got it going and it appears everything worked out.

We lost track of how much total sparge water we added, but we ended up with about 26 gallons of wort in the kettle and shut off the flow.

We reached a boil around 3 PM. We boiled a bit and added the hops. Irish moss and a coil went in with about 15 minutes left.

Coldbreak went really well. We used the immersion coil to drop the temp to 120 F or so, which didn’t take but 15 minutes or less. We then ran the wort through the heat exchanger and dropped the temp to around 60 F going into the fermenter. We pitched yeast immediately

Kyle claimed at one point that the whole batch was spoiled and that we were never brewing at his infected home again. A week later he was ready to do heads-up taste test against Schlafly’s Kolsch, which was named best craft beer in America in some national ranking. He’s bottled and kegged it. I (Tom) expect it to be better than last year’s batch because of the hops, but we’ll see. 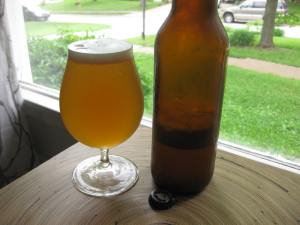 May 16- An awesome beer that, in my (Tom’s) opinion beats last year’s Kölsch all to hell. We had the huge concerns during the lauter and then Kyle thought it was jacked up in fermentation, but this beer is really good. A beautiful yellow glow, a well-carbonated beer with good head retention, the Hallertau hops is well balanced with the malt. Nomination for beer of the year.