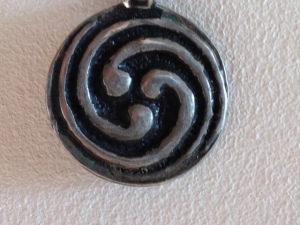 When I gathered the grains for the Abbey (Abdij) Ale, I also got ingredients for a trip(p)el. It was a cold day to brew here for Hogmanay 2013, but from the weather outlook, it was the best one for a while. Huckleberry should appreciate the simplicity of the grain bill.

Part of the incentive for brewing again so quickly was so that I could use the same Abbey Ale yeast from the Solis Thoor Abbey Ale to ferment the Tripel. Taking a bit of a risk here that I can get things going, but since the Abbey Ale is still fermenting, it seems like I should be able to jump start the batch one way or another.

Not wanting to add any color, I made a starter with 1/2 c white Belgian candi sugar to a pint of water. This made a solution with a gravity of 1.060. I also added a tsp of yeast nutrient. Then, I siphoned off some of the top yeasty slurry from the fermenting Abbey Ale. This was a little messy, but hopefully I got enough yeast cells to start a fermentation.

This was done while the mash was resting. I should have done it a day or two before, but didn’t exactly know when I was going to be brewing.

My hope is that the Abbey Ale will be done fermenting when this one is in motion, so that I can use the yeast from this one to referment the Abbey Ale in the bottle. But the best laid schemes o’ mice an’ men gang aft agley…

I used the same step infusion procedure as for the Abbey Ale.

I mashed in with about 3 gallons of Poland Spring water. Mash seemed nicely stiff as it hurt my forearm to stir it. But I did do deadlifts the day before.

Sparged with 5 gallons of water at 180F. About 2 gallons of this was spring water, and the rest was well water from Solis Thoor. Wanted to get the boil going quickly, as there was a hockey game at 16:00, so halfway through, I switched collection pots and put the first one on the boil.

At 30 min into boil, 1.5 lb white soft candi sugar was added and stirred in. This is the lightest in color, which is appropriate to the style.

Pot was left to cool while I watched Colgate beat the Russian Stars in an exhibition game. It was a fricken cold and windy day, so I am sure there was not much issue of cooling it.

The gravity is a bit lower than the Abbey Ale, but that is OK, since I didn’t call the Abbey a Dubbel. This is about in the middle of the range for a Tripel. I would have boiled longer if not for hockey, and I would have put it back on the boil after the game, but it was so fricken cold that it would take an hour to get it back to boil. This will be high enough.

The starter I had made was not really moving much. The airlock was pushed in the right direction, and it bubbled now and then, but not a lot. I didn’t want to overwhelm the yeast, so I left the carboy unyeasted (unleavened?) until morning. In the morning, I pitched yeast starter and now have both ales with blow off tubes joined. Hopefully, the Abbey Ale inspires the Tripel. 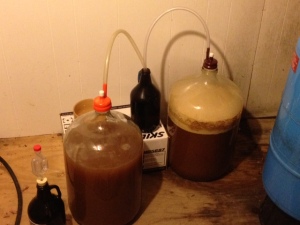 I have never been too good at being seasonal in my brewing. I am always brewing what I want to drink at the time, rather than what I will want to drink when it is ready.

Early tastes had good flavor but the carbonation was not there for a Belgian style. This seems to have been just a time issue. A growler opened on 13 April had perfect carbonation. And a bottle opened two days later verified this. Nice fluffy white foam and almost champagne-like carbonation deriving from the refermentation in the bottle and characteristic of the Belgian styles. Color is maybe a touch dark, but still lovely. Flavor is excellent. A very good brew. 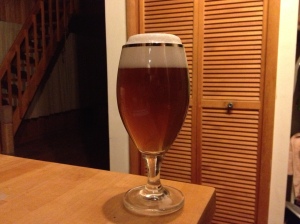