I don’t do many pale ales, but we need a beer for the crawdad boil in May, something that will go well with spicy food and easy enough for the south-side kids. I examined my last pale ale and it was more of an ESB than an Ordinary Bitter. I noted then that I should try backing off the Maris Otter for the next one. My thought for this beer was simply pale malt with a handful of 40L crystal, but I see that I have a pound of the Maris Otter and some 10L crystal in stores.  The 10L seems way too light to me, but amber beers frighten those that are used to American Industrial Lagers, so I’ll give the 10L a shot. I also had some Carapils in stores, so because I can’t leave well enough alone, I’ll add that for head retention and mouthfeel.

I was planning on doing a step-infusion mash just to demonstrate it to the usual suspects, but this style and malt really call for a single infusion mash, so I’ll mash in at 150F for 90 minutes and proceed normally.

Starting Gravity= 1.050 (right where it should be)

Pitched yeast with starter that was begun 4 days earlier in malt extract. Had a strong bubble before end of the night. Fermenting in basement in plastic bucket at 60F.

This beer really doesn’t need a secondary, but I racked it into a carboy to let it clear. Two weeks after brewing

Gravity = 1.015  Perhaps a little high for a true bitter, but right in the ballpark for an American Pale and what I expected with the Whitbread yeast. The sample was great and this beer is ready to keg. It concerns me a little that this beer is pencilled in for the crawdad boil; that’s too far away. Maybe I brew another one for the boil and drink this one now. I think it might be past its peak by the time June rolls around.

Alcohol by volume is about 4.9%

I kegged this beer at the end of April. After much research and deliberation, I kegged this at 25 psi, double what I normally run. This will hopefully get the beer at the right carbonation once it’s chilled. 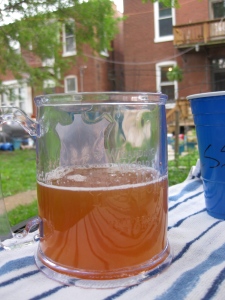 My concerns that this beer would be overripe were unfounded. Christine, Charlie and I took this and the Irish Red Rye over to Kyle’s last night to give it a chance to settle before the party. We tapped it and it was outstanding. Great flavor, great color, properly hopped, cold and well carbonated. Kyle commented that it may be the best Pale Ale he’s ever had. I am quite pleased and rather relieved.

This beer and the Irish Red were a huge success. Both kegs were finished by 9 pm, which tells me if we do it again next year, we’re gonna need another keg. I think the Pale was drained before the Red. I also think that with the beer getting served so cold, it took away much of the subtle differences between these beers, but people like ice cold beer and this beer was ice cold. And I can’t complain; it was good perfect for the setting and I felt really good that people liked it so much.

Holly discovered that I brewed the beer and invited me to her craft/homebrew beer party that she has, which she said would be next fall. Cyr complimented me on both beers. Roland seemed impressed with the product and said he is still very interested in coming out for a brew session. So, it was a hit with the ZS folks. Maybe I do a brew session and invite the them out, but I better have a keg ready to tap when they get here.