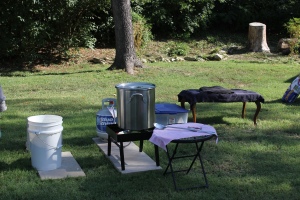 The kettle on the new burner.

This is the hefe recipe that everybody seems to enjoy. The guys at work have been requesting that I bring a beer in and this is the one they want.

In a way I’m opening the brewery for the season. The last beer was the Oktoberfest to close the season.

There’s a new addition to the brewery; I’ve bought a new propane burner, which reaches 55,000 BTUs. I opted for the square top so that I could see the kettle sitting on the burner. There was a burner that was even bigger but it seemed over kill for my 10 gallon kettle. 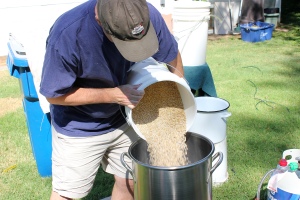 However, things got a little weird after the mash. Sparging went well, though perhaps a little too quickly, maybe taking 30 minutes. We had set up a three-tiered system so as to be able to sprage the grains and have the runoff go directly into the kettle for boil. It was pretty slick with my only concern being that it went too quickly.

Sparging with the trapeze.

We started boiling around 3:15 and I noted the lack of volume in the kettle, about 5 1/2 gallons. It should have been more like 7 because we needed at least an hour boil for the hops. I pulled a sample out and the gravity was way too high, around 1.070! We added water took another measurement, added more water took a final measurement and at this point we needed to stop the boil to prevent the hops from being in there too long. Next time I need to check gravity and make adjustments before the boil.

Final gravity= 1.058. Higher than I would like but it will work.

Going into the Primary Fermenter

The cold break didn’t go well either. The heat exchanger leaked at the joints going into the kettle and had to constantly be monitored. I thought we got the beer cool enough, but after straining off the hops and getting it into the primary fermenter, it was still over 100 F. I placed it on ice, but it still took forever to cool down. I pitched the yeast around 9:00 PM and went to bed. 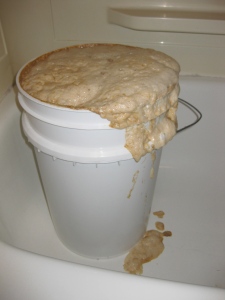 The beer is well and fermenting in the basement. I’ve pulled the lid off the plastic primary bucket and the head has grown well beyond the upper lip. Temperature in the basement is 73 F.

It was very nice brewing outside. It was a warm day and I got sunburned a bit. It was good seeing Charlie, Jim, Garth, and Alan. Brewing is a big project and it’s always nice to have another set of hands available.

One week after brewing, I’ve racked the beer and the gravity has dropped dramatically. Alcohol level is 6.2% by volume. The sample tasted good, strong, green. I’ll let it clear up for a week or two and get it in the keg.

We enjoyed this beer for an Oktoberfest celebration at work on September 21. I was very disappointed that the keg was flat, which was the first time I’ve had this issue since kegging. I suppose I did not have it under pressure long enough. That is the only explanation I have at the moment.

The flavor ws good and the beer was strong. The boys seemed to enjoy it despite that it was flat and were all surprised by the strength. We finished the keg that evening if that is any indication of the quality of the product.