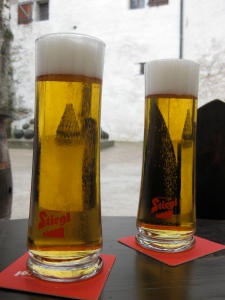 Stiegl in the castle in Salzburg. Those “sticks” are my favorite beer glasses.

As a general rule, I shy away from brewing lagers because I don’t have the fridge space. Regardless, the few lagers I’ve attempted have turned out well enough, so it’s time to try what will likely be my one lager for the year, an Oktoberfest.

Adding to my desire to brew this style, I was in Salzburg, Austria last summer, and I really enjoyed their everyday drinker, which is a Märzen style beer. Those beers were pale though, not nearly as amber colored as what I have come to expect from an Oktoberfest.  This will be an attempt at somewhere between that pale everyday Märzen that I had in Salzburg and a full-blown American, i.e. overdone, Oktoberfest.

I found this page helpful from the BeerSmith.

The grain bill could be 100% Vienna, but most recipes, including my previous attempts at this beer, have at least 50% pilsner malt. I’ll likely add some crystal or other high-kilned malt for a little body, color and/or texture. I’ll go with Hallertau hops or any of the other Noble hops. 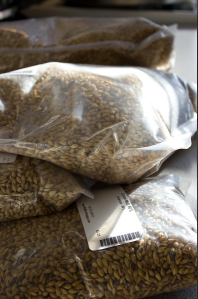 All pics of brewing day are thanks to Chuklz. View his gallery of this brewing session at Brew Day Feb.25, 2011.

A trip to the brew store yielded the above. I used Beer Calculus to tweak the measurements so that the result should be in range for the BJCP guidlines for an Oktoberfest and the following stats:

Broke the yeast smack pack one week prior to brewing. Pitched yeast in 3-4 pints of malt extract with gravity aprox. 1.050. Solid bubble by Sunday morning. Moved starter to cellar at temp of 54 F.

Thursday (5 days after pitching yeast starter) the yeast settled to a very slow bubble. Temps have been consistently in the 50’s. I made another 3 pints of malt extract, racked off the starter beer and poured in the fresh wort. Friday morning had another strong bubble. 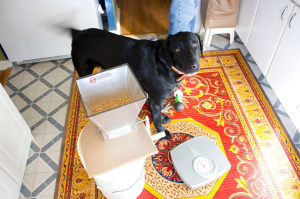 Sam wags his tail as we crack the grains. 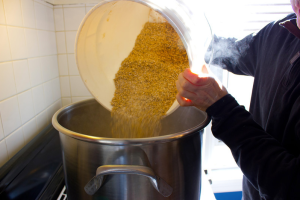 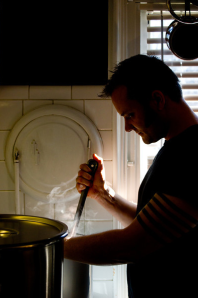 Pitched yeast before 5 PM. Had a strong rolling bubble before bed. Sample is a beautiful dark gold with good aroma and flavor. Has the potential at this point to be a really good beer.

One week later, primary has gone well. Temps in the makeshift cooler in the basement have been steady in the 50’s. The bubble in the airlock, which was furious for days, has slowed to a quiet occasional bubble.

A few days later it is slowly bubbling (once every few minutes). Everything looks good.

March 10- A week after racking, the beer continues to slowly ferment. Temps continue in the 50’s.

March 31- I’ve been disappointed with the warm temps in the cellar, 60F+, for the last couple of weeks. I racked today. Gravity 1.013! Surprisingly low for such a high starting point. I’m liking what the week head start the yeast accomplished. The sample is dry, good, a bit of an off flavor in the middle but an excellent finish. The beer is clear and a great golden color. I’ve racked it into another carboy and will rack it into a keg next to take to the farm to chill for the summer.

September- I tapped the keg only to find the beer flat. WTF? That shouldn’t be and with this beer my only explanation is that someone must have messed with the keg and released the pressure at some point during the summer. The flavor is fantastic, if I can only pressurize the beer. I’ve hooked up the CO2 tank and am leaving it on until the keg is empty. 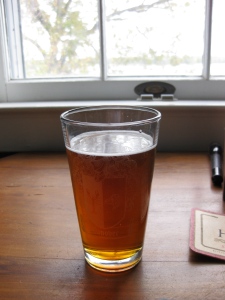 October- The beer improves as the bubbles find their way into solution. However, it seems like it is taking way too long to pressurize. I don’t get it. It is now mid October. The beer is has carbonation, but it still could be more. The good news is that it is arguabley the best Oktoberfest I’ve tasted even without all the bubbles. I’ve now had Schlafly’s, Urban Chestnut’s, 6 Row’s and others and mine is better, frankly, and I think others would concur if I could only keep a decent head on this beer.

Winter 2012/13- This beer just got better and better all winter. It was great to have the keg available to me all winter long at the farm. It was past its prime by January but was still better than most. Time to do another one.